Sports games, practices, recitals, camps, play dates, birthday parties, this club, that club, this event, that event—I know I’m worn out. I have something to say today, though, that might just help you find that moment you have been looking for to catch your breath from all the running around that you do carting your kids from one thing to the next. What I am going to say might just free up some time in what seem to be increasingly busy and chaotic days. Here it goes….

It is OK to let your kids be bored!!

Are you like most parents and feel you are nothing more than a glorified Uber driver? Do you feel like you are your child’s full-time personal assistant working just to keep all of their activities planned and coordinated? Or, do you feel like you are your child’s activity chairman constantly finding things to keep them busy? I don’t know about you but I feel like that is what being a parent is like these days. How often do your children just sit at home or play outside with no agenda and no electronics, just them and anything they can find to creatively play with?

I will be honest that this is something that we struggle with in our house. I will often point out to my husband whenever my kids are just sitting and playing with their toys and what a treat it is to see that.

I am actually going to tell on my husband. A friend and I had been talking about this one day and she was telling me that someone suggested to her that she stop keeping her children’s days so scheduled with activities. I told her that my husband has a bit of a problem with this himself. On the weekends he feels this need to have our free time scheduled from one activity to the next and going from one place to the next. He is not one to sit around the house on the weekends and my children definitely don’t get the chance to get bored. A few days after my friend and I were talking about this, she was laughing when she told me that she saw my two kids and 5 other kids out in our driveway having a great time washing our cars, having water balloon fights, and playing with the hose when my husband gathered everyone up to leave and go out on the lake. This is because he thought this would be a fun activity for all of the kids.

Do you see what the funny thing here is? There were 7 perfectly content kids, creating ways to have fun all on their own, using their imaginations, and without any adult having to lead them in their play. They were all getting along, getting great exercise, and having a blast (and giving my car a much needed bath). Now, was going out on the lake such a bad thing to have to go do? Of course not. However, letting kids find ways to entertain themselves is priceless. The kids had found a great way to do this on their own and it was great (until my husband’s agenda kicked in!).

Why is it so important to let kids find ways to entertain themselves? Self-led play has been proven time and time again to be crucial to a child’s development, especially for the development of the cognitive skill called executive functioning. To quote Alix Spiegel of NPR in his article Creative Play Makes for Kids in Control, “Executive function has a number of elements, such as working memory and cognitive flexibility. But perhaps the most important is self-regulation- the ability for kids to control their emotions and behavior, resist impulses, and exert self-control and discipline. Executive function- and its self-regulation element- is important. Poor executive function is associated with high dropout rates, drug use and crime. In fact, good executive function is a better predictor of success in school than a child’s IQ.”

Did you catch that? Let me say this in a different way. Free play helps build a child’s executive functioning. Executive functioning included self-regulation and the ability to control emotions, behaviors, and impulses. Therefore, by allowing children to get bored and have time for free (child directed play) we can help them gain the tools needed for self-regulation. Wow! I’m sold.

Most children, when given unstructured time, will rise to the occasion and find something to do. Children are happiest in self-directed play because their play is their work. The problem with planned activity after planned activity is that they are almost always adult directed. Unstructured play time is child directed allowing them to be creative, use their imaginations, and do their own problem solving; it allows them to be the creative problem solvers instead of adults doing all of that for them.

As parents, we play a role in influencing our children’s level of motivation. According to Michael Ungar PhD in an article in Psychology Today article titled “Nurturing Resilience”, “A motivated child is one who is raised to seek new experiences, not one is endlessly protected from boredom.”

Ungar goes on to say that the remedy for boredom is to provide children with an environment that lets them experience autonomy (the ability to work a little on their own), control (the right to have a say over what they do), challenge (a small push beyond their comfort zone), and intrinsic motivation (motivation that comes from inside them). This tells us that the remedy for boredom is not to fill our children’s days for them but to leave some of the responsibility on them of how they can problem solve to cure their own boredom.

This is where I get on my soap box for a moment, so forgive me. How do so many of us parents remedy our children’s boredom these days? I probably don’t have to tell you the answer but will just in case you are getting sleepy right now; electronics. Don’t hate me for saying this, but there is a big problem with this. By handing children’s electronic games to alleviate boredom we actually dig ourselves into an even deeper hole. Ungar states that studies show that kids who regularly use electronics are more likely to feel bored when not doing so than other kids. That means that they will become even more prone to boredom and the vicious cycle begins.

Again, forgive me. I’m not pointing fingers or judging because I am far from a perfect mom, but what if instead of handing your child some kind of electronic video game to play or video to watch on your phone, you let them get bored and find a way to entertain themselves. Perhaps a game of tic- tac- toe or hangman while in the waiting room, coloring or drawing while sitting at a restaurant, or reading a book or doing a word find while taking a road trip.

In the waiting room at the clinic today I was talking to a mom after finishing a session with her son. While I spoke to her, her two kids fought over who got to play games on her phone. I handed them some Therapyputty to play with and they completely entertained themselves all the while doing great work to strengthen their fine motor skills and grip strength; killed two birds with one stone.

I know I am digressing a bit but I do want to encourage you to encourage your children to find ways to beat boredom without video games and by using their own imaginations and problem solving skills. After all, aren’t we trying to raise children who will become successful and independent adults and who are motivated, are creative problem solvers, and can self-regulate?

I want to end on one other quick story. A few weeks ago my husband, kids and I along with two other families went river tubing in the NC mountains. It was something else to see these kids have to sit in tubes, out in nature floating down a river, with absolutely no entertainment other than what they could think to do themselves for three hours. The look on their faces the first hour was priceless; pure and utter boredom. Around hour 2, though, an amazing thing happened; they actually started to enjoy themselves. It was as if it took the first hour to detox from constant stimulation in order to get to a place where they were OK with under stimulation. It was an amazing way to spend a day with family and friends, but what I loved the most was seeing the kids learn to adjust to no electronics and learn to be OK with a state of under stimulation.

So moms and dads, sit back, grab your newspaper and a cup of coffee, and just let your kids figure out how to entertain themselves. They may just surprise you!!

Cindy Utzinger is an Occupational Therapist and author of “Why is My Kid Doing That?” A Sensory Approach to Understanding Your Child’s Behavior. She equips parents with the tools to help see their child’s behavior through a sensory lens.
Back to Blog 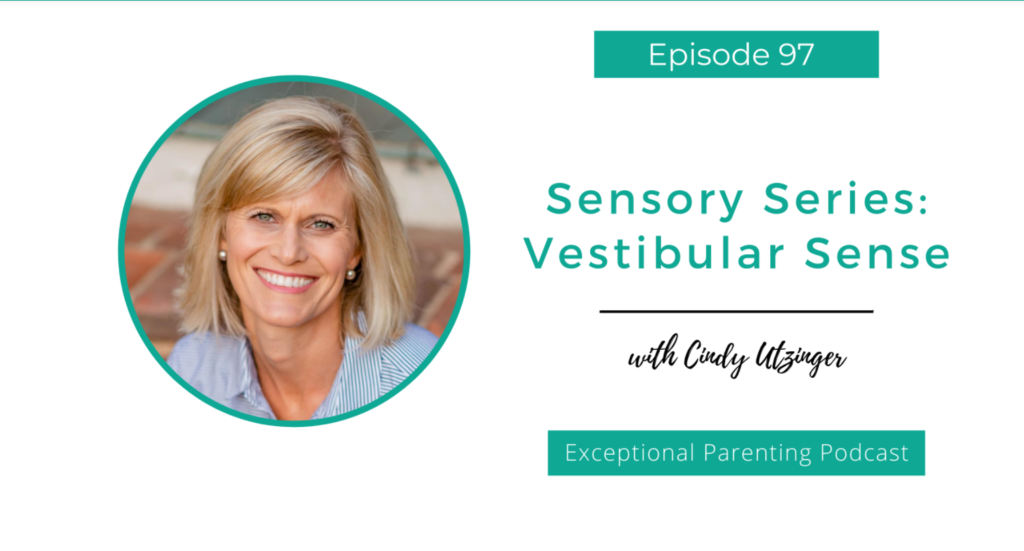 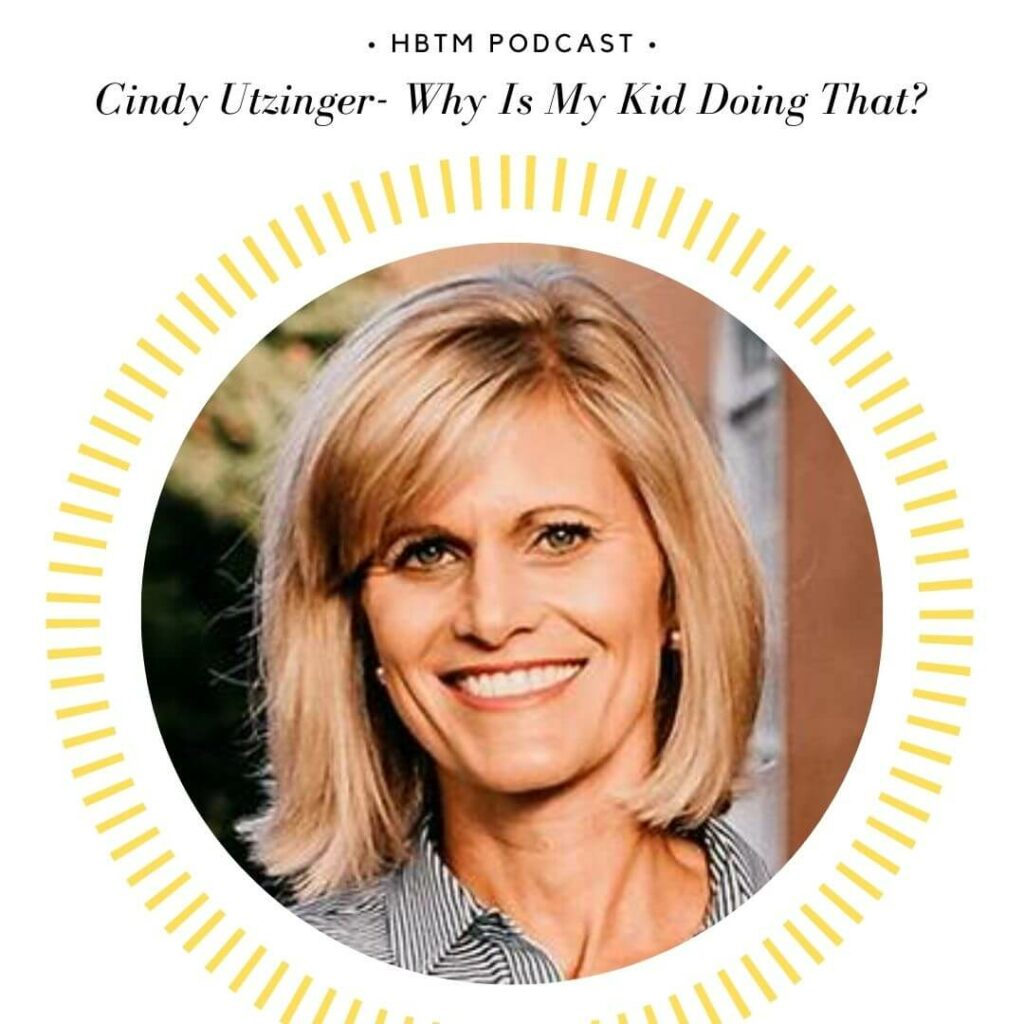 Happier by the Minute